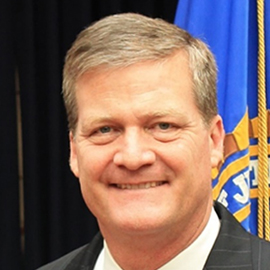 Jim Daly retired after a distinguished career with the Arlington County Police Department (ACPD) located in Arlington, Virginia that spanned over twenty-seven years. He started in policing in 1990 and over the course of his career, he was a first responder to natural and man-made disasters and became a leader and subject matter expert in the area of crisis and emergency management. In 1996, he was selected to be a member of the ACPD Emergency Response Team – Crisis Negotiation Unit and was an active member for the next sixteen years, the last five as commander. As Jim rose through the ranks of the Department, he became more embedded in disaster and critical incident response/management. On 9/11 he responded to the Pentagon and was tasked with establishing the Staging Area for responding agencies and later worked in evidence recovery. In 2005, he responded as a member of Arlington Task Force I to New Orleans in the aftermath of Hurricane Katrina and helped establish the Emergency Operations Center for the City of New Orleans. While in New Orleans, he became part of a massive task force to help re-establish continuity of operations for emergency services and the City.  From 2005-2011, he was the lead for the Emergency Support Function (ESF-13 – Law Enforcement and Security) for Arlington County and from 2006-2012, he was selected to serve on the National Capital Regions – Incident Management Team. In 2011, he was promoted to Captain where he commanded the Information and Technology Management Section and then finished his career with ACPD as a commander of the Patrol Section.

Following his retirement, he formed his own company, Daly910 Consulting, LLC.  The company provides training and consulting services to police agencies and private businesses throughout the United States. He has developed and taught training programs to law enforcement in the areas of homeland security initiatives, community policing, and leadership, and has taught business topics related to emergency preparedness and continuity of operations. He has also consulted on a government COVID-19 Task Force.

Jim holds a Bachelor of Arts from the Virginia Military Institute and a Master of Science in Administration (Public Administration) from Central Michigan University. He is a graduate of the FBI-National Academy as well as the Senior Management Institute for Police (SMIP) and the Professional Executive Leadership School (PELS).